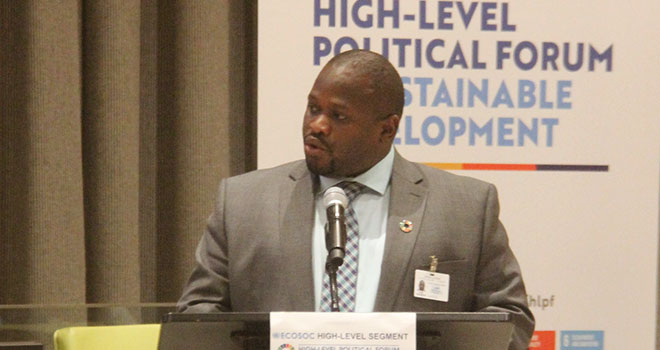 Zambia has outlined progress to undertake the implementation of the United Nations (UN) Sustainable Development Goals (SDGs), which largely form the framework for a structured approach to social and economic development of nations across the globe.
The Southern African nation has so far integrated about 86 percent of the Sustainable Development Goals in the 7th National Development Plan (7NDP) since the choreographing of the global agenda in 2015 in prioritising its socio-economic development.
Minister of National Development and Planning, Alexander Chiteme has told the United Nations that Zambia has formulated its 7th National Development Programme (7NDP) and aligned it to the SDGs in the quest to meet national developmental targets.
The Sustainable Development Goals (SDGs) are a global agenda, adopted by countries in 2015, with a vision of ending poverty, protecting the planet and ensuring that all people enjoy peace and prosperity.
“In our endeavour to tackle SDG 6, Zambia has increased the proportion of households accessing improved sources of drinking water to 67.7 percent from 63 percent. To address the high burden of sanitation and hygiene related morbidity and mortality especially among rural communities, Government is implementing the Zambia Sanitation and Hygiene Programme whose core activities include the increase in the use of improved sanitation facilities to 75 percent from 46 percent. This will contribute in the reduction of diarrheal diseases among children,” Mr Chiteme said.
Mr Chitme stated that Zambia’s target in the energy sector is to increase its capacity in renewable energy generation by about 6 percent by the year 2021 with a progressive increase of up to 15 percent by 2030.
In pursuing SDG number 7, Zambia’s strategy is to diversify its energy mix in a bid to reduce on Green-House gas emissions as well as moving away from the dependency on hydro-power generated energy which is currently at 90 percent.
The Minister explained that the peril of over-dependence on hydro-power energy has been that Zambia has been exposed to climate change variabilities, which have affected the good performance of the country’s economy.
Zambia has prioritised the decentralisation reforms which would ensure the localisation of governance and planning system as adopted in SDG 11.
Embassy of The Republic of Zambia Brussels © 2020 All Rights Reserved Terms of Use and Privacy Policy