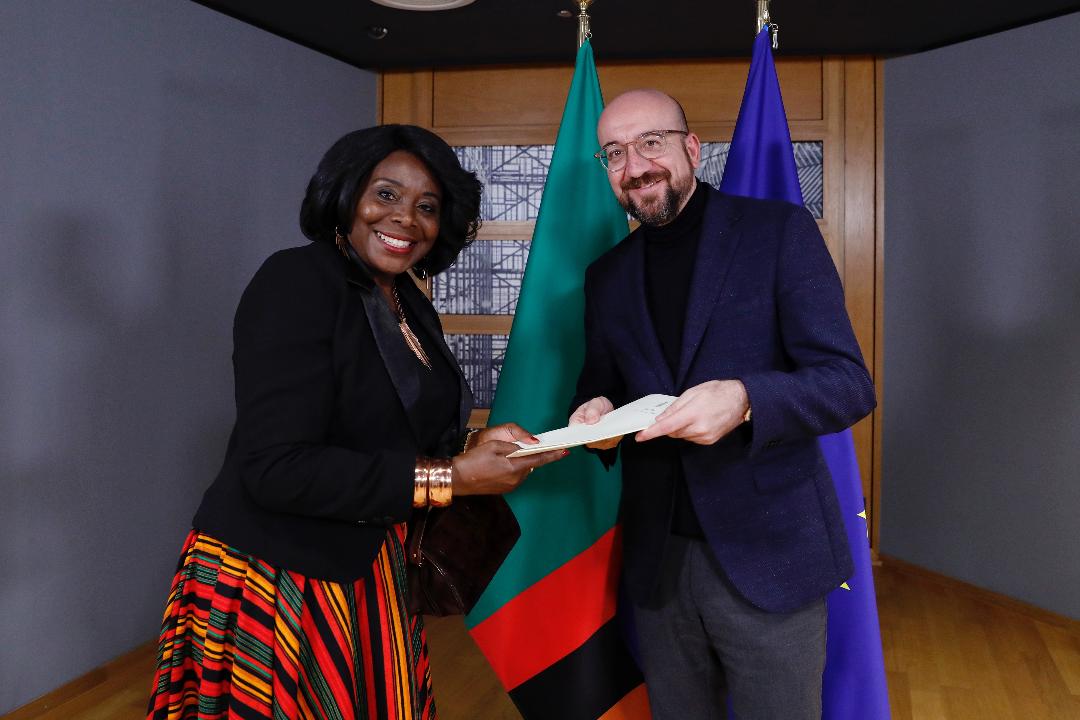 EU COMMITED TO WORKING WITH ZAMBIA

The European Union has reaffirmed its commitment to strengthen its relations with Zambia to enhance its economic development.
President of the Council, Charles Michel says the EU is committed to building strong ties with Zambia specifically in the area of Trade as well as other areas of mutual benefit.
Mr Michel explains that the EU is aware of Zambia’s important role in the Great Lake Region, hence the desire to collaborate with Zambia.
He also explains that the EU is keen to partner with Zambia in the energy sector in the light of the power deficit caused by the drastic climate change.
He further explains that the EU has devised  deliberate strategies to ensure that partnerships with Zambia and Africa are those that would be sustainable and beneficial to all parties involved.
He said this when he received letters of credence from Zambia’s Ambassador to Belgium and Permanent Representation to the EU, Her Excellency Prof. Esther Munalula Nkandu.
In relation to the upcoming AU-EU summit to be held in Brussels this year, President Michel said he looks forward to meeting with President Lungu during the said summit.
And speaking earlier, Prof. Esther Munalula Nkandu lobbied the EU for partnership in value addition of commodities and capacity building towards the same, enhancement of trade within the Southern Region and with the EU and capacity building in alternate energy sources given the impact of climate change.
She further lobbied for the creation of a one-stop-shop at the border post between Zambia and the Democratic Republic of Congo and also appealed for the enhancement of other trade corridors that connect Zambia with its neighbours given its advantageous geographical location.
The Ambassador appealed to the President to consider other earlier commitments made by the EU during the last EU delegation to Zambia in 2019 which included among others, empowering the girl child and support to education, energy, agriculture and economic governance.
The Ambassador, who is the first envoy to ever present letters of credence to President Charles Michel since taking up Presidency of the Council of the EU in December 2019, says she remains optimistic of continued collaboration with the EU towards the development of the nation.