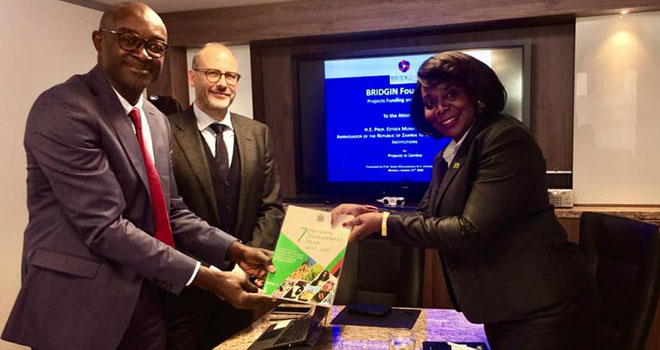 BRIDGIN Foundation, has indicated that it is open and eager to collaborate with Zambia in line with the country’s development plans.  President and CEO of the BRIDGIN Foundation Prof. Tanko Mouhamadou, affirmed this during an introductory meeting with Zamba’s Ambassador to Belgium, Netherlands and Luxemburg (Designate) and Permanent Representative to the EU, Her Excellency Prof. Esther Munalula Nkandu, at the Foundation’s offices in Brussels.  Professor Tanko explained that his foundation was committed to working with developing countries such as Zambia on priority projects that align with the BRIDGIN Foundation’s mission to contribute to the economic, social and industrial development of Emerging Countries by funding their priority Projects and Programmes within the context of the United Nations Sustainable Development Goals (SDGs).
He explained that their work was anchored on three main pillars: resources, education and culture. Further Prof. Tanko highlighted that the Foundation provides funds exclusively for public investments on a Public-Private Partnership (PPP) model and in this regard finances country priority projects, of no less than EUR100 million, involving key collaborators that include Governments, Western Solution Providers, Auditing and Management Firms, Local Subcontractors, Research Centres and Universities.
Explaining the work of the BRIDGIN Foundation, Prof. Tanko emphasised the important role that diplomatic missions play in initiating requests for collaboration on behalf of respective countries. He also explained that though they are a non profit organisation, the Foundation’s role as a financier also entails operating within among others EU, US, Belgian and International banking, governance and compliance frameworks for effective collaboration.
Prof. Tanko in thanking Ambassador Nkandu for meeting with him reiterated that he was looking forward to receiving an expression of interest from Zambia via the Mission and for subsequent fruitful collaboration in contributing to Zambia’s development efforts and aspirations.
Speaking on the same occasion Zambia’s Ambassador to Belgium and Permanent Representative to the EU, Her Excellency Prof. Esther Munalula Nkandu commended the BRIDGIN Foundation for the work it was doing in contributing to the development efforts of least developed countries. She highlighted various linkages between Zambia’s development Agenda laid out in the 7th National Development Plan (7NDP) and the work of the BRIDGIN Foundation with respect to the UN SDGs.
Ambassador Nkandu reiterated the goal of Zambia’s 7NDP to create a diversified and resilient economy and the driving sectors: Agriculture, Tourism, Manufacturing and Mining. She also indicated the Mission’s strategic focus on the Economic Diversification and Job Creation pillar of the plan as being key to making linkages with the great work that the BRIDGIN foundation was doing.
Her Excellency, Prof. Esther Munalula Nkandu also highlighted the importance of collaborating on not just the key sectors but also on projects including youth employment targeted at tackling the plight of street kids, Agriculture support for small scale farmers, and also Sanitation and access to safe drinking water, especially in rural areas as part of the countries priorities in respect to collaborating with the Foundation.
The Ambassador also used the occasion to handover a copy of Zambia’s current principal policy document for socio-economic development planning, the 7th National Development Plan, to the BRIDGIN Foundation CEO, Prof. Tanko Mouhamadou.