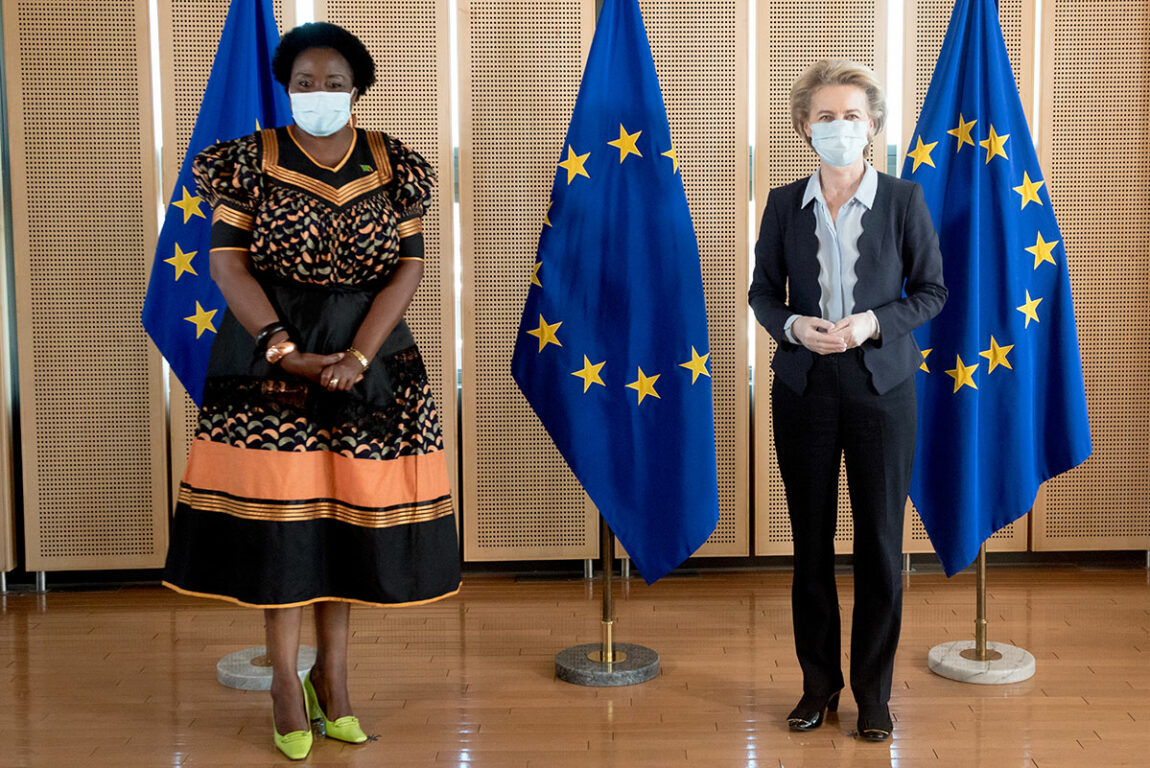 Zambia’s Ambassador to Belgium, Her Excellency Prof. Esther Munalula Nkandu has presented her letters of credence to the President of the European Commission, Ms, Ursula Von Der Leyen.
Speaking at the event held at the Berlaymont building of the European Commission’s Headquarters in Brussels,  Prof. Munalula- Nkandu explained her vision in strengthening bilateral relations between Zambia and the European Commission.
When asked about her vision during her tenure as Ambassador in Brussels, she told the President that Zambia places greater emphasis on Economic Diplomacy as well as contributing to enhancing Zambia’s economic development.
The Ambassador further underscored the role that Trade plays in fostering economic development and stressed the need for value addition to all that Zambia produces before it would enter the European market.
She explained that Zambia is focusing on exploring means of increasing trade as well as other areas of mutual benefits.
“We see the EU as an important partner in enhancing economic development through trade. Zambia does not want to solely base its North South relationship with the EU as being donor-recipient, but rather a partnership of equals focused on enhancing economic development that will be mutually beneficial.” The Ambassador explained.
She further highlighted Zambia’s geographic strength in enhancing North South-South relations through existing trade corridors.
And President of the European Commission said Zambia’s trade aspiration aligned well with her vision for the Commission.
President Von Der Leyen explained that she will strive for strengthening responsible global leadership through Multilateralism, as well as strengthen Europe’s role as a global leader and standard setter through a strong, open and fair trade agenda.
The President further stated that she remains optimistic of a good relationship with Zambia.
Her Excellency Professor Esther Munalula Nkandu is among the first Ambassadors to present credentials to Ms Ursula Von Der Leyen since she took office as President of the Commission on 1st December 2019.
Prior to her appointment, President Ursula Von Der Leyen served in various high level positions, with the most recent being a Federal Minister of Defence in Germany from 2013 – 2019.
She remains the longest-serving member of Angela Merkel’s cabinet, since her first appointment as Federal Minister of Family Affairs and Youth in 2005.
Issued By:
Phyllis Chilekwa (Ms)
First Secretary – Press and Public Relations
Embassy of the Republic of Zambia
Brussels – Belgium
Embassy of The Republic of Zambia Brussels © 2020 All Rights Reserved Terms of Use and Privacy Policy