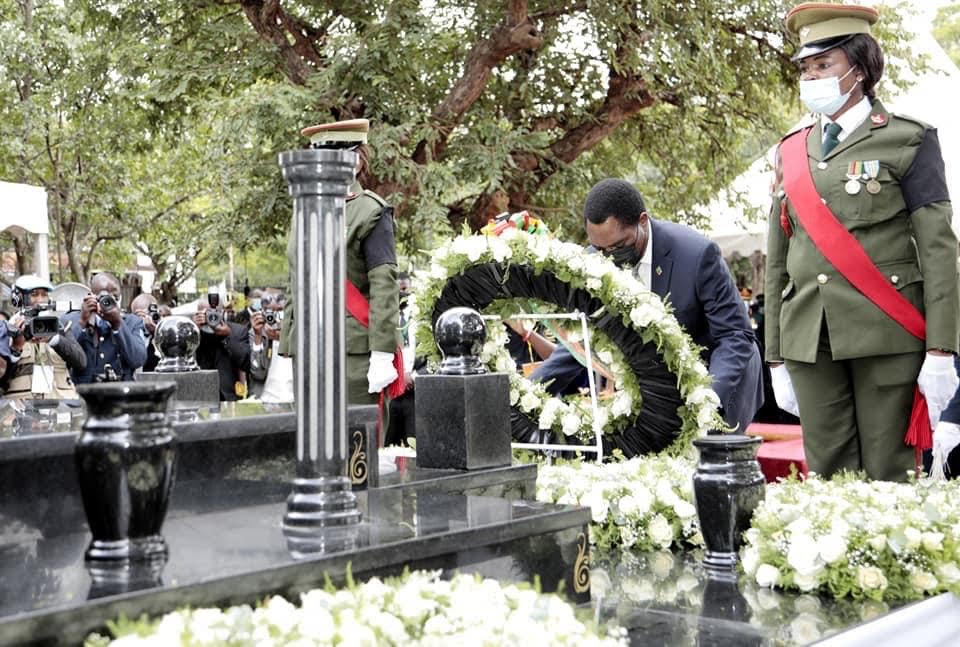 Below are the remarks of President Hakainde Hichilema:

Today the 18th March 2022, we have put to rest former President Rupiah Bwezani Banda. There are no perfect words to describe him. He was a hero of the liberation struggle, an astute and strategic diplomat, a great statesman, and a pacifist.

The character of the life he led might be summed up in a few words: sincere, he was earnest, he was loyal to his nation, a loving husband to his wife and a devoted father to his children. He was a man with a big heart, a great sense of duty and a great deal of patriotism.

President Rupiah Bwezani Banda was a life that burned so that others’ paths were lit. He gave energy, commitment and inspiration to the nation. Even as we mourn President Rupiah Bwezani Banda, we are comforted by the thought that we were privileged to have met and known him. This value and other shared values he upheld, we will forever cherish. His legacy will never be forgotten by the Nation, nor separated from us.

“For I am convinced that neither death nor life, neither angels nor demons neither the present nor the future, nor any powers, neither height nor depth, nor anything else in all creation, will be able to separate us from the love of God that is in Christ Jesus our Lord”

President Rupiah Bwezani Banda fought a good fight for which the Nation is forever grateful. We will never forget him.

The one and sure way we can honour RB is to continue living in peace, love and unity that characterized this ceremony. This is the only way we will hand over a sustainable country to future generations and this is the Zambia we envisioned.

We end by quoting a great 18th century English poet Laurence Binyon with the poem entitled ‘For the fallen’.

“They shall grow not old, as we that are left grow old:

Age shall not weary them, nor the years condemn.

At the going down of the sun and in the morning

We will remember them”.

May His Soul Rest In Peace.

God bless you fellow citizens, God bless Africa, and May He bless the Republic of Zambia.

Hakainde Hichilema,
President of the Republic of Zambia