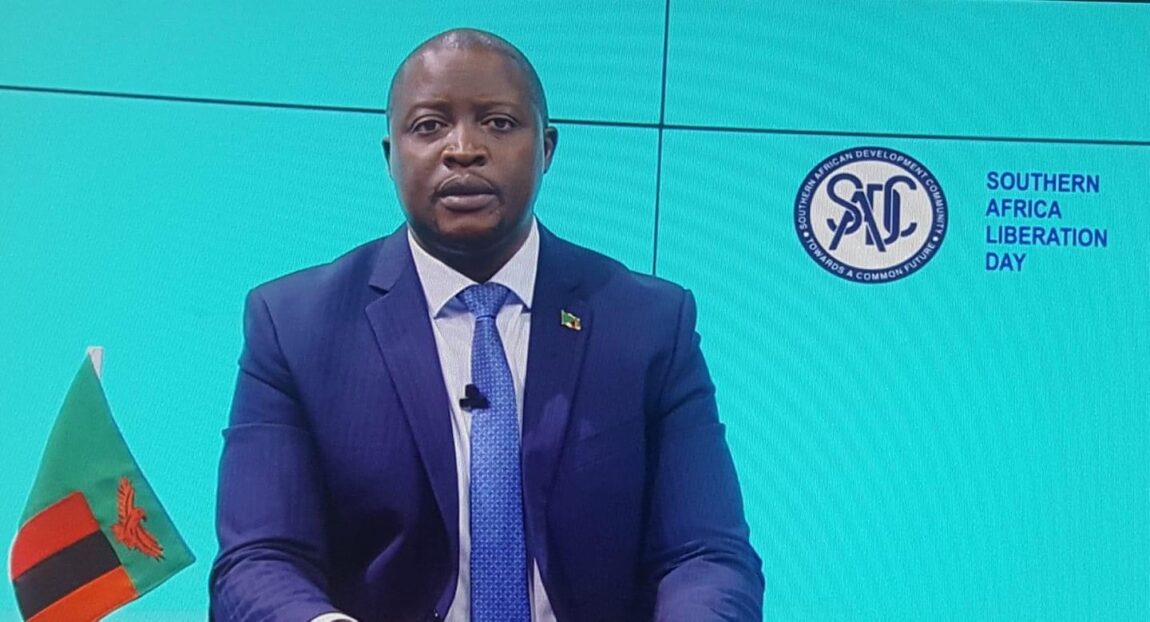 Zambia has joined other members of the Southern African Development Community in commemorating the SADC (Liberation Day which fall on 23rd March 2022.

Below is the statement by Minister of Foreign Affairs and International Cooperation, Hon. Stanley Kakubo.

Fellow citizens
On the eve of the Southern African Development Community (SADC) Liberation Day, which falls on 23rd March 2022, we remember the gallant sons and daughters who paid the ultimate price in fighting for political liberation and freedom of the southern African region.
As part of preserving the history and institutional memory of SADC, the SADC Summit, in August 2018, in Windhoek, Namibia endorsed 23rd March as the day marking the Southern Africa Liberation Day.
The date is a special day for the region, highly regarded as one of the turning points in southern Africa’s history for the struggle and resistance against colonialism and apartheid.
Since 2019, SADC commemorates 23rd March as the day that marked the end to one of the fiercest conventional battles at Cuito Cuanavale in southern Angola, where the armed forces of the apartheid regime of South Africa were defeated.
This battle paved the way for the independence of Namibia and the release of Nelson Madiba Mandela, and it also marked the end of apartheid in South Africa.
Fellow citizens
We recall that during the struggle, Zambia itself experienced an economic blockade, with trading routes to the south closed.
Infrastructure such as roads and bridges were bombed to punish Zambia for its support of the liberation struggle in the region and its fierce opposition to apartheid. Zambians paid a heavy price, and many lives were lost during the struggle for freedom.
Regardless of the economic sacrifice, loss of lives and damage to infrastructure, leaders in the southern African region were committed and resolute in standing in solidarity with brothers and sisters in Zimbabwe, Namibia and South Africa.
This was out of a realization that our people would not be free until all the vestiges of oppression, discrimination and domination were eliminated from all countries in the region.
Fellow citizens
Indeed, due to this determination and resolute stand by the torch bearers of freedom, such as Nelson Mandela, Steve Biko, Solomon Mahlangu and Oliver Tambo of South Africa; Robert Gabriel Mugabe, Abel Muzorewa, Joshua Nkhomo and Ndabaningi Sithole of the then Southern Rhodesia, and now, Zimbabwe.
Others include Tobias Hainyeko, Dimo Hamaambo, Peter Nanyemba and Sam Nujoma of the then South West Africa, and now, Namibia; the region witnessed the independence of Zimbabwe in 1980, Namibia in 1990, and the collapse of apartheid in 1994.
Zambia pays tribute to its own fallen leaders and freedom fighters who fought for this cause.
Dr. Kenneth David Kaunda, the founding father of our nation and leader of the Frontline States, was unequivocal in his stance on the liberation of southern Africa.
Due recognition also goes to Mr. Simon Kapwepwe, Mr. Mainza Chona, Mr. Arthur Wina and Mr. Reuben Kamanga, among others.
Fellow citizens
The path to the consolidation of our region can be traced back to the birth of SADC whose predecessor, the Southern African Development Coordination Conference (SADCC), was launched on 1st April 1980, in Zambia’s capital, Lusaka.
At that meeting, leaders from nine (9) countries in the region came together, to establish an organization to fight for a common cause for the people of southern Africa, which was political and economic freedom. The leaders were from Angola, Mozambique, Zimbabwe, Malawi, Tanzania, Botswana, Lesotho, Swaziland and the host, Zambia.
Those in attendance included Dr. Kenneth Kaunda, Founding Father and First President of the Republic of Zambia; Dr. Mwalimu Julius Kambaraga Nyerere, First President of the United Republic of Tanzania and Mr. Samora Machel, Founding President of the Republic of Mozambique.
Others were Mr. Robert Gabriel Mugabe, Prime Minister-designate of the Republic of Zimbabwe; Mr. Jose Eduardo dos Santos, then President of the Republic of Angola; and Sir Quett Ketumile Joni Masire, then Vice President of the Republic of Botswana.
Fellow citizens
The mandate of the SADCC was to secure international cooperation to attain economic liberation, forge regional integration and reduce member states’ dependence on the then apartheid regime in South Africa.
The organization was established at a time when the region was grappling with colonialism in Namibia and the white minority rule in Zimbabwe. The apartheid regime of South Africa as earlier mentioned, attacked neighboring countries including Zambia with its economic and military power in defence of its discriminatory practices.
The Southern African Development Coordination Conference (SADCC) was transformed into the Southern African Development Community (SADC) on 17th August 1992 in Windhoek, Namibia with the adoption of the SADC Treaty.
This formed the basis of cooperation among Member States and the organisation was redefined from a loose association, into a legally binding arrangement.
The mandate of SADC is to achieve development, peace and security, as well as economic growth, to alleviate poverty, and enhance the standard and quality of life of the peoples of southern Africa. This would be achieved through regional integration, support for democratic principles and equitable and sustainable development.
From its inception, SADC has achieved much in terms of regional economic integration, promotion of peace and security, harmonization of regional policies, promotion of democracy and good governance, regional infrastructure development and promotion of economic growth in the region.
Although much has been achieved, more needs to be done.
As the nation may be aware, the region is working towards restoring peace in Cabo Delgado Province of Mozambique through the SADC Mission in Mozambique (SAMIM).
Zambia is playing a significant role in the SAMIM, as we did in the liberation struggle, through the contribution of troops to this regional initiative.
SADC has continued to collaborate with the United Nations Organisation Stabilisation Mission in the Democratic Republic of Congo (MONUSCO), in efforts aimed at stabilising the eastern DRC.
Fellow citizens
As we join the rest of the SADC countries in commemorating the Southern Africa Liberation Day, we remember the gallant sons and daughters who paid the ultimate price for our political liberation, rights and freedoms.
Let us emulate their spirit of selflessness, patriotism and self-sacrifice which should engender a culture of hard work required to building a region that is peaceful, stable and prosperous.