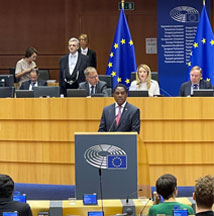 President HAKAINDE HICHILEMA has called for a favourable trade and investment relationship between Zambia and the European Union.

The President also reaffirmed his commitment to ensuring that Zambia remains a preferred investment destination.

He said Zambia has the capacity to produce quality goods and services for the EU and global market, hence government’s campaign to turn Zambia into a more productive and industrious economy.

The Head of State also called on the EU for a mutually beneficial cooperation to establish financial package to create sustainable Small and Medium Enterprises – SMEs.

President HICHILEMA added that government is aware of SMEs contribution to the socio-economic development of a country hence the need to empower and support them.

And speaking earlier, President of the European Parliament Ms ROBERTA METSOLA reaffirmed the EU’s commitment to the Zambian government.

President METSOLA says Zambia and the EU have a long term and stable relationship rooted in mutual respect and cooperation, shared values of democracy, respect of the rule of law and human rights.

She says that the EU is in support government’s economic recovery agenda.

She added that the EU, through the Global Gateway Africa Initiative and political dialogue will help government tackle its main priorities and challenges.

President HICHILEMA has since concluded his Brussels trip and proceeded to Rwanda for the 26th Commonwealth Head of Government meeting.