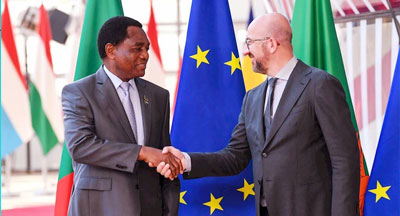 President HAKAINDE HICHILEMA, has called on the need for enhanced partnership between Zambia and Europe.

The Head of State says enhanced partnerships in areas of trade and investment between Zambia and Europe are key to a path of sustainable development in place of aid.

He said this during a bilateral meeting held with President of the European Union, CHARLES MICHEL at the European Council in Brussels today.

The President also stressed on the need to unlock some trade barriers.

He added that he remains committed to seeing Zambian products on the international market by increased investment in Value addition.

President HICHILEMA also met with the European Union Commissioner for international partnerships Ms Jutta Urpilainen where he reiterated his commitment to ensure that Zambia engages in partnerships that are mutually beneficial.