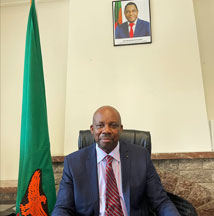 The Embassy of the Republic of Zambia in Brussels is pleased to announce the arrival of Zambia’s Ambassador designate to Belgium, His Excellency Mr Sylvester Mundanda.

A career Diplomat and Economist by profession, Ambassador Mundanda brings to the Mission his extensive knowledge and expertise in multidisciplinary engagements with the international community at bilateral, regional, International, and multilateral levels.

On his return to Zambia, Ambassador Mundanda was then appointed Assistant Director under Development Cooperation, and subsequently promoted as Head of Department for International Organisation, a position he held until his appointment as Zambia’s Ambassador to Belgium.

He also served in the Task force on Zambia’s options to be a member of either SADC or COMESA, and represented the Ministry of Foreign Affairs on the Board of Directors for the Zambia International Trade Fair (ZITF) from 1999 to 2002.

The Ambassador Designate holds a Master of Science in Development Finance from the University of London, a Bachelors and Masters of Science in Economics (Monetary and Credit Relations) from Kiev State University, among other disciplines.

He replaces Ambassador Prof. Esther Munalula-Nkandu who has since returned to Zambia following the end of her tour of duty.