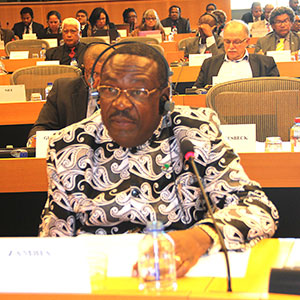 BRUSSELS, FRIDAY, 24TH MARCH, 2017 – Zambian Member of Parliament Sebastian Kopulande has called for non-interference in aid management system.
Presenting a report on “Improving Aid and Development Effectiveness in EU-ACP Cooperation” to the Joint Parliamentary Assembly in Brussels yesterday, Mr Kopulande said EU aid should not be tied to priorities chosen by donors other than respect for human rights and democracy. He said since the primary aim of donor aid was to assist developing countries attain much needed economic development, recipient countries needed to be free to define their future by coming up with development plans they wish to implement in line with their local needs. He said to maximise aid effectiveness, donor countries needed to take into account critical assessment of local needs of recipient countries, and ensure effective monitoring mechanisms are in place.

Mr Kopulande said what ACP countries were asking for was self-determination to decide the use of aid resources through capacity building – as a way for economic development and prosperity.
The Zambian parliamentarian further expressed concern at the slow pace by donor countries in meeting the 0.7% pledge of their Gross National Income (GNI) official development aid.
“[ACP ] laments the failure by the European Union to meet its commitment to provide 0.7% of Gross National Income”, he said.
Mr Kopulande added that the idea of looking at ACP states as suppliers of raw material to industries of developed world was not only unsustainable, but also against the principle of contemporary international trade and development.
“We looking for trade relations and capacity that add value to our own raw materials, so we can become more competitive in international trade”, he noted.
On the role of civil society in aid management, Mr Kopulande said the structure was not helping aid effectiveness because most organisations were serving the interest of donor countries as opposed to recipient countries.

“We need to examine the role of civil society organisations. When we are talking about people defining their own aid use, it’s important to look at issues surrounding civil society [organisations’ involvement in aid management]”, said Mr Kopulande.