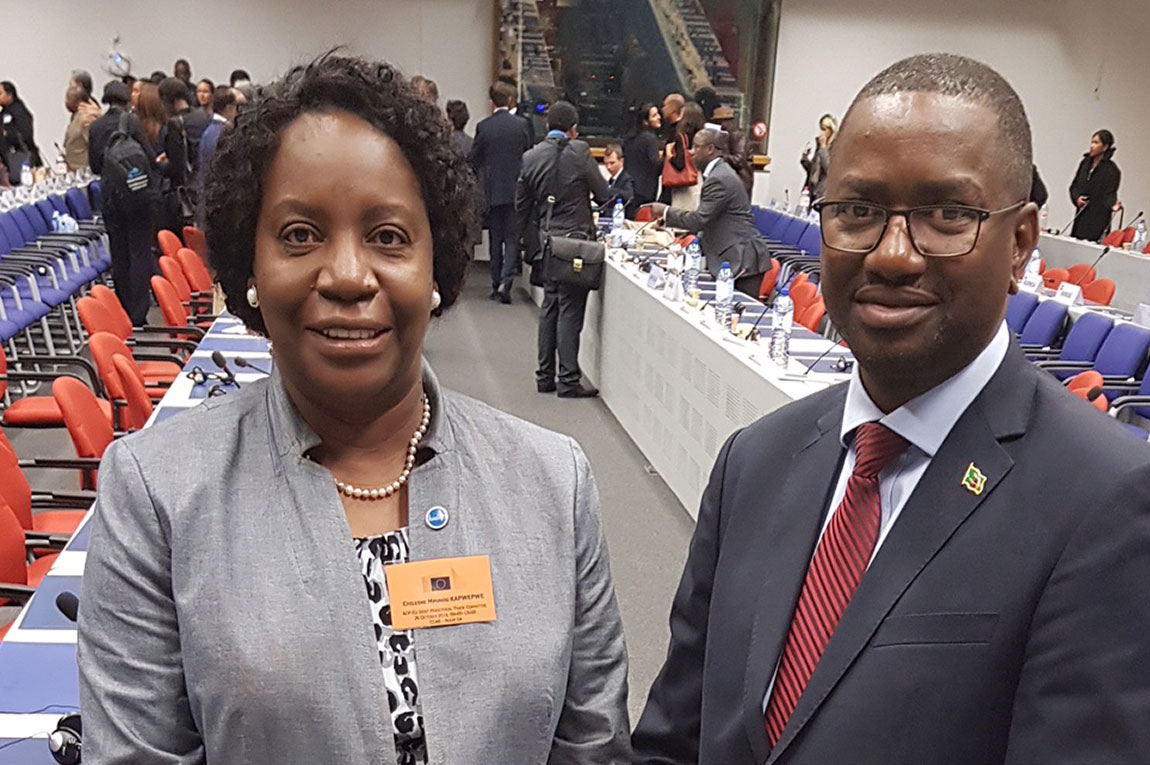 ZAMBIA READY TO ENGAGE THE EUROPEAN UNION ON EPAs

Charge d’ Affaires at the Zambia Embassy in Belgium Mr. Henry Ngilazi urged the European Union to allow beneficial dialogue on the EPAs in order to make them truly partnership agreements.

Mr. Ngilazi made the remarks during the 16th meeting of the African Caribbean Pacific and European Union (ACP-EU) Ministerial Trade Joint Committee where he represented Commerce and Trade Minister Hon. Christopher Yaluma M.P. in Brussels.

Mr. Ngilazi said it was worrying that the outstanding issues on which negotiations were suspended by the EU relate to the development component of the EPAs.

He wondered how the partnership agreements would serve as instruments of development in their current form.

“The European Union has in the recent past tightened sanitary and phytosanitary requirements, which in themselves are nullifying the very market access which EU has committed to give under EPAs. Where will such requirements leave ACP states in terms of real market access and entry into the EU if there are no accompanying development provisions and measures under EPAs,” Mr. Ngilazi said.

He urged the European Union to consider reopening the negotiations on EPAs to enable the resolution of outstanding issues conclusively.

Mr. Ngilazi also emphasised the importance of engaging all eleven Eastern and Southern Africa (ESA) states in the process of widening and deepening the ESA-EPA agreement as they were key in the initial negotiations of its content.

The EPAs are trade and development agreements negotiated between EU and ACP countries aimed at promoting trade and investment, ultimately contributing to sustainable development and poverty reduction.

And the Commonwealth has reaffirmed its support of Zambia’s trade and development agenda.

She said the Commonwealth is determined to help deliver the benefits of integration and partnership for inclusive economic growth and sustainable development to leverage south to south engagement as well as to boost investment linkages through connectivity agenda.

Hon. Scotland made the remarks during the opening of the Trade Ministerial Conference in Brussels on Wednesday, in response to a question by Mr. Ngilazi regarding the Everything But Arms (EBA) initiative.

Everything But Arms is an initiative of the EU under which all imports to the region from Least Developed Countries (LDCs) are duty-free with the exception of arms. The initiative aims to encourage the development of the world’s poorest countries.

“It’s been an absolute pleasure to work with Zambia and the Commonwealth remains committed to supporting Zambia’s and all ACP member states as a whole in various programmes of development and trade. The Commonwealth is also committed to supporting multilateral system, inclusiveness and stability in turbulent times. We stand ready to offer assistance to help you achieve all your trade aspirations,” Hon. Scotland said.

Earlier, United Kingdom’s Minister of State for Trade Policy Hon. George Hollingberry said the EBA initiative was already structured under the Queens books and would be considered soon after the BREXIT talks.

Over 70 Trade Ministers and senior officials from ACP member states and other international organisations have convened in Belgium’s capital, Brussels to discuss and negotiate various trade related matters with the EU.