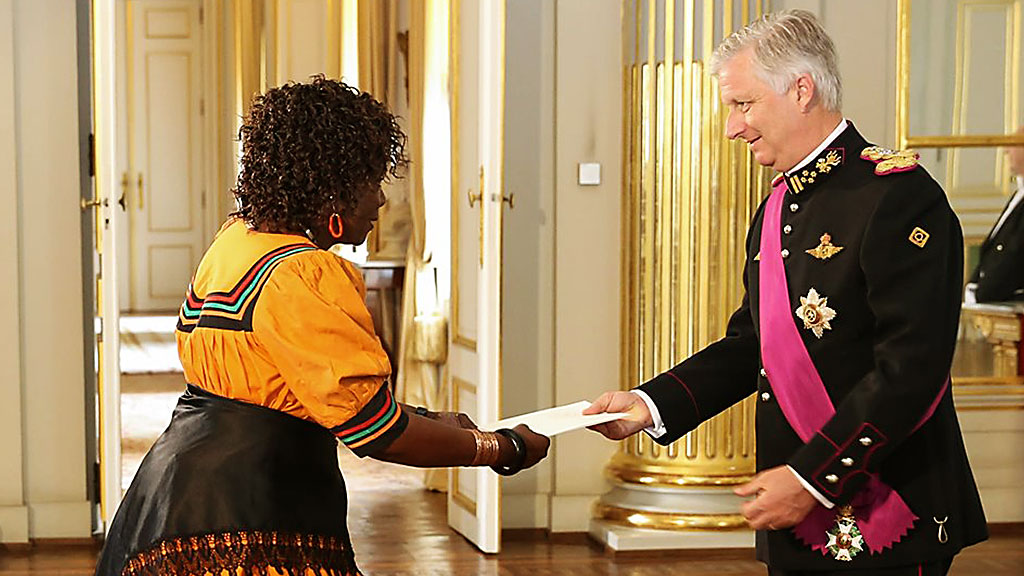 Zambia’s Ambassador accredited to the Kingdom of Belgium, Her Excellency Professor Esther Munalula Nkandu today presented her letters of Credence to His Majesty the King of Belgians, King Philippe Leopold Louis Marie.

Speaking during the colourful ceremony at the Palais Royal de Bruxelles, the King Phillipe warmly welcomed the Ambassador and spoke highly of the already existing relations between the two governments.

The King encouraged the Ambassador to fully utilise her role in order to strengthen the ties of collaboration and mutual benefit of both governments.

He implored the Ambassador to engage with the Belgian government departments responsible for her specific areas of interest which may culminate in meeting her objectives and goals.

And Ambassador Prof. Munalula Nkandu has called for close collaboration in the areas of trade and investment between the Belgian and the Zambian government.

The Ambassador explained to the King that Zambia is endowed with many natural resources that greatly contribute to the country’s economy.

She says government has created a deliberate economic policy framework that aims to diversify the economy.

“Your Majesty, Zambia has so much to offer in terms of trade and investment opportunities. Zambia is blessed with many natural resources and as such we are slowly moving away from being a copper dependent economy.

The Zambian government has embraced the fact that the key to socio economic development lies in the diversification of its economy, and as such government has created the Seventh National Development Plan which is economic policy framework that will work as a blueprint to achieve the objectives we have set for our country’s development.

We have amazing waterfalls and parks for tourism, and vast land and good weather for agriculture and infrastructure development as well as mining which is not limited to copper and gemstone but many others including uranium which will feed well into the diversity of power supply”, the Ambassador explains.

The Ambassador says she remains optimistic of a good relationship between the two governments as they work together towards achieving goals and objects of mutual benefit.