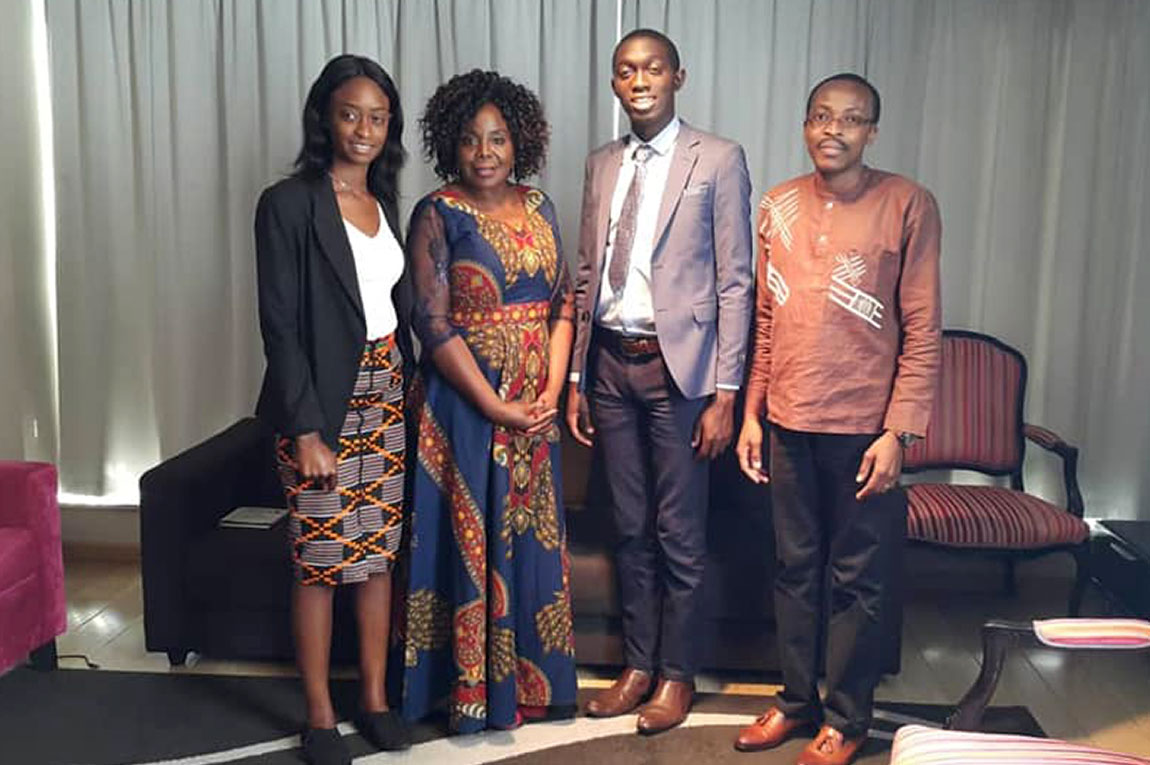 Zambia’s Ambassador to Brussels Prof. Esther Munalula Nkandu has applauded Mwala Mooto and Inota Cheta for raising the country’s flag at the just ended European Development Days 2019.
The Ambassador says it was encouraging to see young people taking their places in addressing the many challenges of the world and putting their governments to task.
She says the Zambian government remains committed to ensure that young people are included on various issues of national development.
She says this was evidence by the promotion of youth in government and leadership positions as well as the formation of the youth fund.
The Ambassador further called on the youth to ensure that they utilize the many youth development projects that government had embarked on.
She reassured the duo of the missions unwavering support to their projects and engagements especially with international organisations.
She said this when Mr Mooto and Ms Cheta called on her at her residence in Brussels.
And Mr Mooto has urged the young people to utilise social media and the internet to their advantage.
He says many young people were misinformed about the projects on youth fund due to lack of knowledge.
He says the Zambian government had made significant efforts on youth empowerment projects but only a few had the knowledge on how to access them.
“Personally, I would say that government has made progress in terms of youth involvement on national issues as well as youth empowerment but very few of us are well informed and actually take interest on how to access them. I think there’s a lot of misinformation among the young people on many issues. The formation of the aquaculture project, the Citizens Economic Empowerment Commission are just a few examples of projects for youth empowerment.
For example, I keep getting questions on how I got to speak at such a high-level panel, but you know the information was in the public domain and I applied. Also, my company was born out of the Zambia cashew development project so you can see that these projects actually do serve their purpose”, Mr Mooto explained.
Mwala Mooto and Inota Cheta were chosen among the 15 young leaders across the globe to speak at high level panels during the European Development Days – EDD.
The EDD is Europe’s leading forum on development organised by the European Commission bringing the development community together each year to share ideas and experiences in ways that inspire new partnerships and innovative solutions to the world’s most pressing challenges.
This years EDD overarching title was “Addressing inequalities: building a world which leaves no one behind”, and was graced by several world leaders among them the Her Majesty the Queen of Belgium, President of the European Parliament Mr Antonio Tajani, President of Rwanda H.E Mr. Paul Kagame, President of Senegal H.E Mr. Macky Sall, African Caribbean and Pacific – ACP group of States Secretary General Dr. Patrick Gomes among others.