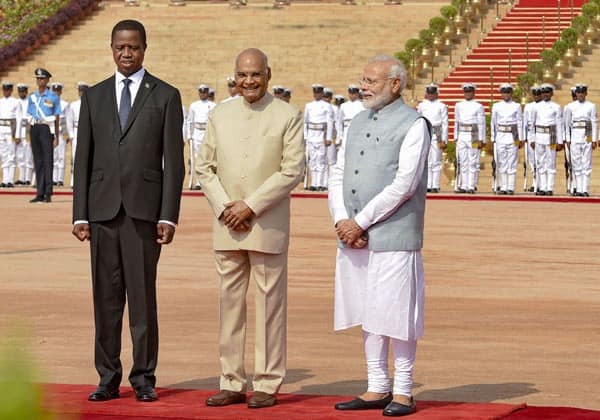 JOINT STATEMENT ON THE OCCASION OF THE STATE VISIT TO INDIA BY H.E. MR. EDGAR CHAGWA LUNGU, PRESIDENT OF THE REPUBLIC OF ZAMBIA FROM 20th– 22nd AUGUST, 2019

The Official Programme included a ceremonial reception at Rashtrapati Bhavan, meeting with the President of India Shri Ram Nath Kovind and delegation level talks with Prime Minister Modi; a Banquet hosted by the President of India; courtesy call by Minister of State for External Affairs, Shri V. Muraleedharan; and participation in an India- Zambia Business Forum in New Delhi. On 22nd August, H.E. President Lungu visited an agro-business/food processing unit in the NCR region.

Bilateral Talks between the two sides were held in a warm and friendly atmosphere. The discussions covered bilateral, regional and international issues of mutual interest. President Kovind warmly recalled his fruitful visit to Zambia in 2018. The two Leaders reviewed the status of the Agreements signed and decisions reached by the two countries during the State visit of President Kovind to Zambia in April 2018 and expressed satisfaction over the progress made.5. During the meeting between His Excellency President Lungu and Hon’ble Prime Minister Modi, the two Leaders acknowledged the deep rooted excellent relations between India and Zambia and reaffirmed the mutual desire to further strengthen economic, commercial, health, infrastructure, capacity building and cultural cooperation between the two countries. His Excellency President Lungu expressed gratitude for Government of India’s support for Zambia’s developmental  programmes including in energy, health, infrastructure, capacity building and trade.

H.E. President Lungu warmly recalled the contribution of India towards capacity building of Zambia and in particular of the Defense Forces and conveyed happiness at the conclusion of the MoU on Defence cooperation paving way for the enhancement of cooperation in this sector.

During the visit, the following bilateral agreements/MoUs were signed:- MoU on Defence Cooperation, MoU on cooperation the the field of Geology and Mineral
Resources, MoU on Cooperation in the field of Health and Medicine, MoU on Art & Culture; MoU between the Foreign Service Institute of India and Zambian Institute of Diplomacy and International Studies; Memorandum of Mutual Understanding and Cooperation in the field of Elections between the Election Commission of India and the Electoral Commission of Zambia. In addition, an MoU for Zambia’s participation in tele-education, telemedicine i.e. e-VBAB Network Project was also signed.

India announced support to set up an a SME Incubation Centre, with a view to promote development of Small and Medium enterprises in Zambia. In addition, Government of India announced grants for 100 Solar Irrigation pumps for boosting agriculture in Zambia and 5 Fire tenders for deployment at Zambia Air force Bases.
India also announced grant of 1000 MT of rice and 100 MT of milk powder as humanitarian assistance.

President Lungu expressed his profound gratitude for the announcements as well as for the donation of medicines and medical equipments worth $3 mn delivered to Zambia, announced during the visit of Hon’ble President of India last year. Further, His Excellency President Lungu expressed gratitude for the donation of $100,000 to the Mahatma Gandhi Primary School, that was also announced during the visit for upgrading the school to a Secondary School. In addition, His Excellency President Lungu announced that as a show of appreciation and in honour of the 150thanniversary of the birth of Mahatma Gandhi, the Zambian Government would welcome the installation of the bust of Mahatma Gandhi at the school;

The two sides –
• Discussed the positive impact of cooperation in the area of Health Sector and expressed satisfaction over the ongoing construction of 650 Health Post in Zambia;

• Expressed satisfaction at the ongoing implementation of the Lusaka City Roads Decongestion Project, funded with support from Indian Government under Buyers
Credit scheme of Exim Bank of India;

• Acknowledged the steady inflow of Indian private investment into Zambia, notably in sectors of mining, infrastructure, manufacturing and pharmaceuticals and of late
into Agriculture. They noted with satisfaction the steady increase in bilateral trade, which stood at US$ 833 million in 2018 – 19 dominated mainly by exports from Zambia and stressed the need to expand the basketof traded items;

• Reiterated the importance of cultural interactions and people to people contacts in strengthening bilateral relations;

• Welcomed conclusion of the Cultural Exchange Programme (CEP) so as to boost cultural exchanges. The Leaders expressed satisfaction over the increasing flow of tourists between the two countries;• Agreed to intensify cooperation at the United Nations and other multilateral fora in order to address current global challenges such as climate change, peace, security, and sustainable development;

• Reiterated their strong support for the ongoing reforms of the United Nations and its principal organs with a view to making the institution more democratic, representative, transparent and efficient so that it can deal more effectively with the myriad challenges of the contemporary world. They emphasised the importance of an early reform of the United Nations Security Council, in permanent and nonpermanent membership categories, so that it reflects the current realities and functions in an accountable, representative and effective manner. They underlined the importance of reformed multilateralism.

• Unequivocally condemned terrorism in all its forms and manifestations and reiterated their commitment to working together in this regard, including to expedite the finalisation of the Comprehensive Convention on International Terrorism. The two Leaders emphasised the importance of international efforts and agreed that resolute and credible steps must be taken to eliminate safe havens for terrorists and their activities. In this context, PM Modi thanked President Lungu for the strong condemnation of Pulwama terrorists attack and the solidarity expressed with India and its people.

• Expressed satisfaction with the regular high-level contacts between the two countries that provide the much-needed impetus to progressive enhancement and deepening of
bilateral ties across the entire spectrum of cooperation. The State Visit of H.E. Mr. Edgar Chagwa Lungu, President of Republic of Zambia, marked the beginning of a new era of cooperation between the two countries and was an important step in the enhancement of bilateral relations. H.E. President Lungu profoundly thanked H.E. Ram Nath Kovind, President of the Republic of India, for the warm hospitality and honour accorded to him and his Delegation.