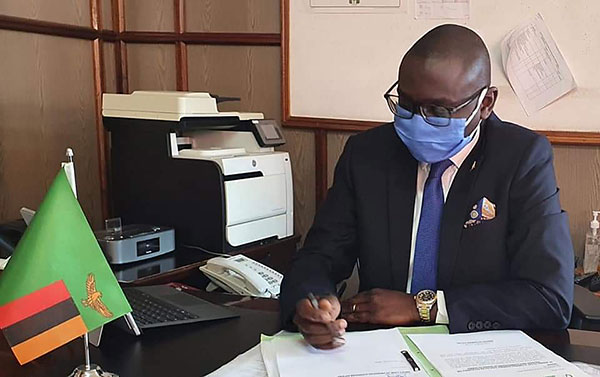 And Ambassador Lombe informed Zambian Missions based in Europe that President Edgar Lungu has given Zambians in the diaspora an equal opportunity to access land on the same basis as their fellow citizens at home. President Lungu wants every Zambian wherever they may be to be part and parcel of the development process underway in the country.

Ambassador Lombe said it was important for Missions abroad to take deliberate steps to reach out to Zambians in the diaspora and to share with them pertinent issues contained in the Diaspora Policy such as acquisition of national documents like passports as well as dual citizenship.

During the Europe Missions Diaspora engagement virtual clinic, the Permanent Secretary said President Edgar Lungu had delivered on the Diaspora Policy and taken the lead to engage Zambians abroad whenever he travelled.

Ambassador Lombe said it was now the duty of Missions abroad to be proactive and not reactive when dealing with Zambians in the diaspora.

“As Missions, you must ensure that you engage all Zambians in the Diaspora. Make sure you build and work together to remove the perception that you are not welcoming and accommodative. You are in Missions to serve the Zambians in the diaspora. It is only through working together that we will successful implement the Diaspora Policy” he said.

And to operationalize the President’s diaspora policy on access to land, Ambassador Lombe said a diaspora website will soon be launched where advertisements for land made by different local authorities in the country will be advertised so that they become immediately available to everyone at the same time.

“we know currently, the applicant for land has to be present in person to present the application, but we will seek to allow for proxies to undertake this role for those living outside the country”, Ambassador Lombe said.

Apparently, access to land is one the questions constantly asked by those in the diaspora who have been facing challenges in their attempts to participate in land acquisition.

Because of the geographical divide, Ambassador Lombe said the Zambian government is embracing communication technologies to fill information gaps and facilitate access to essential public services such as passports and birth certificates.

Through information and communication technologies, ICTs, Ambassador Lombe said the Ministry of Foreign Affairs was in talks with various financial institutions in Zambia with a view to finding a way of lowering the cost of remitting funds back home.

During the Diaspora Engagement Virtual Clinic, Ambassador Lombe announced the establishment of the Diaspora Desk at the Ministry of Foreign Affairs, Home Affairs and foreign missions specifically to deal with matters related to those living abroad.

The initiative is part of the requirements for the operationalization of the diaspora policy which was launched in April 2019 and now being rolled out.

The document is an official recognition of the diaspora by the Zambian government and their role in national development. To tap into this population, the policy provides for guidelines regarding how they may be harnessed, and their participation facilitated through the provision of a variety of essential public services.

ISSUED BY ALL PRESS SECRETARIES IN MISSIONS BASED IN EUROPE