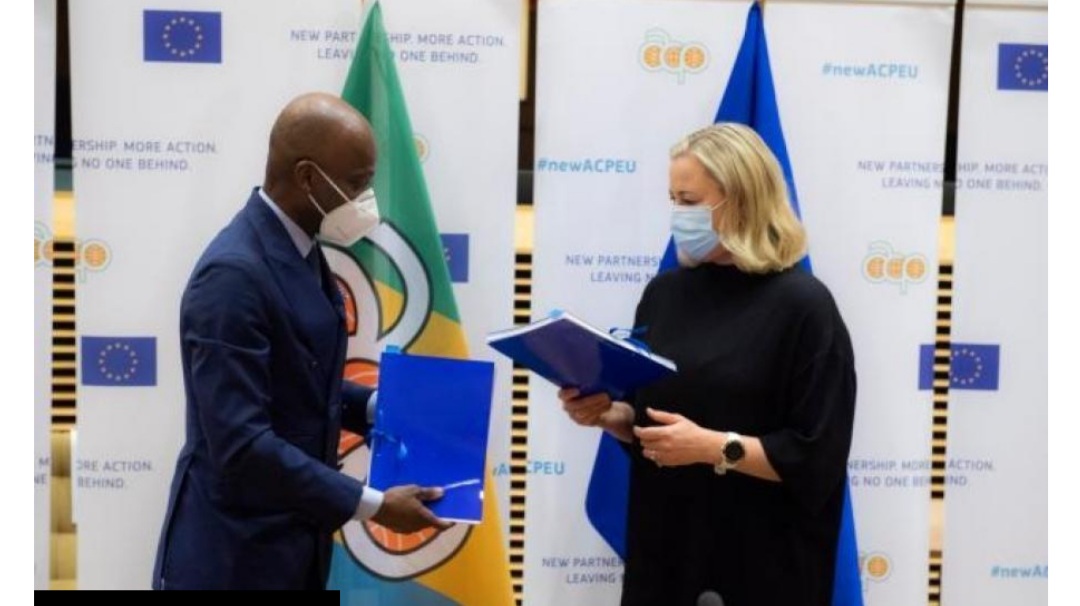 The European Union – EU and the Organization of African, Caribbean and Pacific States (OACPS), formerly the African, Caribbean and Pacific (ACP) Group of States have initialled a new partnership agreement following the conclusion of the negotiations for the Post Cotonou agreement.
The initialling ceremony of the new partnership agreement led by EU Commissioner for International Partnerships, Jutta Urpilainen, and the ACP’s Professor Robert Dussey, Minister of Foreign Affairs of Togo, was held last night in the EUs capital, Brussels.
The new agreement will provide the legal framework governing the political, economic and development cooperation between the OACPS and the EU for the next 20 years,
The agreement will also aim to transform the relationship between the OACPS and EU from one of donor/recipient to a more advanced partnership which will enable cooperation to address issues of common interest, such as health (COVID-19), economic and climate change.
EU Commissioner for International Partnerships, Jutta Urpilainen, says she is optimistic that the agreement will deepen the already existing relations between the EU and the OACPS.
Mrs Jutta Urpilainen also explains that the renewed partnership marks a step towards a new era for the over 1.5 billion people in the EU, Africa, the Caribbean and the Pacific as they will benefit from the ambitious Agreement that will improve people’s life with a special focus on human development.
“This agreement is a turning point, and I am confident that it will make the relations more political and fit for the future. It goes beyond the Cotonou agreement in various fields, and it clearly sets our vision to build together peaceful societies and a world that leaves no one behind by putting human rights, gender equality, democracy and good governance at the core of our partnership” says Commissioner Urpilainen.
She has since called on both parties for the swift signing, ratification, and subsequent implementation of the agreement to take the OACPS/EU relationship to new and higher levels.
And speaking at the same occasion, OACPS representative and Chief Negotiator Professor Robert Dussey has reaffirmed the OACPS commitment to enhance the renewal of the long-standing cooperation between the two organisations.
Prof. Dussey says the initialling of the agreement is an eloquent testimony of the continuous trust and confidence that has characterised the cooperation between OACPS and EU.
The Togolese Minster of Foreign Affairs further explained that the OACPS attaches great importance and value to the renewed agreement that will not only address OACPS expectations but also consider the unprecedented challenges that confront the world due to Covid-19.
He added that the new agreement is of particular importance to the OACPS as it paves the way for a modern and more committed partnership at both regional and international levels.
The European Union -EU and the Organization of African, Caribbean and Pacific Sates – OACPS have governed their relationship since 1975 through a sequence of partnership agreements, with the most recent being the Cotonou Partnership Agreement, which was due to expire in 2020 but was deferred to second half of 2021 when the both parties complete their respective internal procedures and sign the Agreement for its entry into force.